The Workonics are a team of worker robots in Aftercharge. They were created by the Aftercharge Corporation to build the Extractors that harvest Quanta Energy on Dusk 11. This has damaged the core of Dusk 11, which resulted in seismic activity unleashing a Quanta burst that reanimated the workers after they were shut down. Now they seek to destroy the extractors in order to save the planet.

In a match, the goal of the Workonics is to destroy the six Extractors despite the efforts of Enforcers to stop them. They have stealth abilities built into them, a defense against corporate espionage, and use melee attacks. They have the ability to send overcharge charges between each other to improve their Overcharge Abilities or revive their fallen allies. 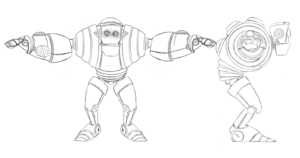 There are six types of Workonics:

Each Workonic is completely invisible from the opponents' point of view. Their walking speed is a bit higher than the Enforcers allowing them to escape more easily.

Workonics attack by punching. The Extractors are destroyed by punching them 10 times. Punching an Enforcer will not damage them in any way but they will be pushed back, this is useful to stop them from following you. Do note that while punching you will be briefly revealed, giving away your location.

When Workonics are disabled they can be revived by their teammates. It is important to revive your teammates as quickly as possible as when all three Workonics are taken out you lose the game. After being revived you will be invulnerable to damage for about half a second but unable to attack, so use this time to get away! To prevent an unfair advantage, it takes about one second after being taken out until you can be revived again. 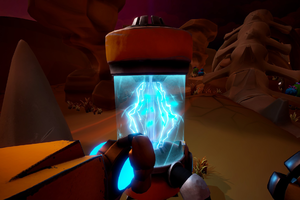 Punch the Extractors to destroy them

The Workonics' goal is to stay alive while taking down all 6 Extractors. You destroy an Extractor by punching it 10 times. The enemy Enforcers will try to stop you however. Their guns and abilities will deal damage to you and reduce your health. If at any point your health reaches 0 you will go into Shutdown and unable to take actions. Do not worry however, as any of your teammates will be able to quickly revive you. It is of utmost importance to try to keep your teammates alive by protecting them and reviving them when needed.

Try to avoid the enemy Enforcers as much as possible in order to not get taken out by them. Attacking Extractors that are not defended and running away when discovered will make it much harder for the Enforcers to disable you. Try to damage Extractors with more health, this will make it easier to win in the end game. Damaged Extractors will recharge the Enforcers' energy slower and are much more difficult to defend for your opponents.

Whenever one of your teammates is disabled you should try to revive them as quickly as possible. This will not give the Enforcers the time to place defenses and traps. Using your Overcharge ability while reviving can be very useful. After reviving try to run in different directions to avoid getting cornered.

During the end game some of the Extractors are taken out and The Enforcers will concentrate on defending one or two Extractors. Fighting for the last Extractor is often the most heated moment in the game. Extractors cannot be repaired so try to attack each Extractor more evenly at the start of the game to make the last Extractor easier to take out.

When attacking a well defended Extractor coordinate with your teammates to attack from different directions. Having one of the Workonics stay further away will allow them to more easily revive others while not getting taken out themselves. Try to use your abilities to break the Enforcers' defenses and provide cover from their attacks. A well coordinated assault on an extractor is nearly impossible to stop if you use your abilities right.

This official guide explains many of the details and strategies for playing as a Workonic.