Training modes can be selected from the main menu. There are three options: Tutorial, Enforcer Training and Workonic Training. The tutorial mode is narrated and teaches the basics of the game for both teams. The other two modes start a training match as either an Enforcer or a Workonic with AI players.

The Tutorial teaches new players how to play as a Workonic and then as an Enforcer. The entire tutorial in narrated. In the first part the player is taught about their invisibility as a Workonic and the Enforcers' Rayvealers. After that they're taught how to revive a teammate, send charges and use their special ability. This part of the tutorial ends with the player destroying an Extractor. The second part teaches how to play as an Enforcer. The player is taught about their energy use and their abilities, then about their Proximity Detector and Rayvealer. Finally, the gate will open and they're tasked with finding and disabling three Workonics hidden on the map. 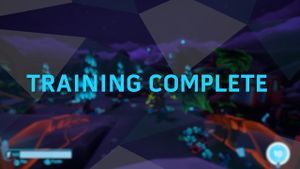 The Enforcer Training is a training match with basic AIs as teammates and opponents. This is the place to easily test out characters and strategies as an Enforcer. The other Enforcers will try to search for Workonics and try to take down any they can see, but will be oblivious to team play or advanced tactics. Also instead of the usual "victory" or "defeat" message, the end screen displays "training complete". Training matches do not reward any experience points.

The Workonic Training is a training match with basic AIs as teammates and opponents. This is the place to easily test out characters and strategies as a Workonic. The AI opponents will search for the Workonics but not employ any strategies or guard objectives. The Workonic teammates will try to take down extractors and revive teammates, also they will try to avoid walking into Enforcers if possible. The rest is the same as Enforcer training but from the Workonic perspective.