Tinker is an Enforcer character in Aftercharge. She is armed with a fast firing Uzi. Also she's able to place jump pads enhancing her teammates' mobility and shields defending extractors from the Workonics.

Tinker is a skilled on-field engineer. She is an expert at crafting devices specifically designer for her mission. When Tinker first joined Aftercharge Corporation she worked on the Glitch Workonic prototype, now she provides enforcers with a tool to travel faster around the battlefields and another device to give a little extra protection to an extractor in danger.

Tinker's weapon of choice is an Uzi. This fully automatic weapon fires very quickly but deals less damage. However it's not very accurate, the large spread makes it more suited for close range encounters. Tinker's Uzi consumes a lot of energy, when low on energy it's best to fire in bursts to preserve energy.

Shooting deals 13 damage and takes 3 energy per shot, shooting continues while the trigger is held down. 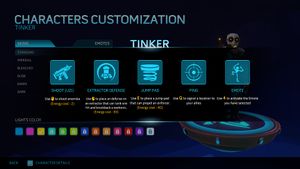 Tinker is able to place a jump pad boosting the mobility of the Enforcers and place a shield defending a single extractor.

Tinker places a boost pad down on the ground propelling Enforcers that step on it. Tinker can have at most 2 out at a time, when a new one is placed the oldest will be destroyed. The pad can be used an unlimited amount of times with a small cooldown between uses. It can be destroyed with a single punch from a Workonic.

Tinker places a cover over an extractor that protects it from one attack. It also pushes the attacker back and makes them visible when destroyed. The Extractor Boost will also increase the recharge rate on the extractor. Tinker can have at most 2 out at a time, when a new one is placed the oldest will be destroyed. Because placing them takes a lot of energy it's best to place them when the coast is clear.

Tinker is a very defense oriented character. With her shields defending extractors and using her Jump Pads to jump from extractor to extractor. Tinker is able to fire faster than any Enforcer allowing her to scan areas quickly with a few bursts and paying attention to hitmarkers.

Because her abilities consume a lot of energy Tinker prefers to stick to the extractors.

These are the skins currently available for Tinker, they are available in the Characters menu.