Striker is an Enforcer character in Aftercharge. He is armed with an automatic rifle and cloak disrupting grenades, taking a more aggressive approach to defending the extractors. He's also able to place beacons that summon a powerful airstrike that takes down any Workonic that didn't run away while it was arming.

Striker is the stalwart leader of the Aftercharge Corporation Enforcers. He’s equipped with a long range rifle and his skills make him the master at denying areas and keeping attackers at a distance. His ion grenades are designed to disrupt the Workonic's invisibility cloak, making it impossible for them to hide for several seconds. He also has the ability to throw a beacon that calls down a powerful aerial strike from the Enforcers' orbital ship.

Striker's weapon of choice is a long range rifle. This versatile weapon is well suited for taking down Workonics at short to medium distances. Striker's rifle has low spread and fires fast, dealing more damage over time than any other Enforcer.

Shooting deals 22 damage per shot and takes 2 energy, shooting continues while the trigger is held down. 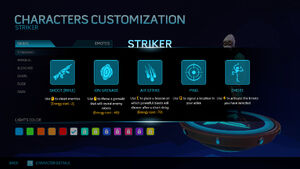 Striker uses ion grenades and a powerful air strike to defend the extractors.

When thrown, Striker's Ion Grenade detonates on impact ans will reveal Workonics within a radius of 20 meters from the impact location. Workonics that are hit by the blast will be visible to all Enforcers for a duration of 4 seconds. Workonics behind walls and bridges will not be hit by the grenade's blast, even though the visible effect goes through objects.

Striker is a character mainly focused on attacking. Using his grenades to reveal nearby Workonics or Workonics at the map's chokepoints and extractors so he can take them down together with his teammates. His airstrikes will deter Workonics from entering an area or can easily take down a Workonic taken by surprise.

Because Striker's weapon consumes little energy he can chase down Workonics pretty well, yet as his abilities consume more energy they're best used when within reach of an extractor to recharge afterwards.

These are the skins currently available for Striker, they are available in the Characters menu.