Liquidator is an Enforcer character in Aftercharge. He is armed with a pair of automatic pistols that are also able to fire a tracking pellet. If this tiny tracker hits a Workonic Liquidator is able to fire six homing shots following the tracker. Liquidator can also place proximity mines.

Liquidator knows that the best defense is a good offense. He defends the extractors by chasing down the Workonics. He’s equipped with dual Quanta pistols and has the ability to shoot a tracker. If the tracker attaches to a robot, the following six shots will automatically land on the target wherever it’s hiding on the map. When you are tracked by the Liquidator, you’re scrap metal. He can also drop proximity mines to cover his back, which is neat.

Liquidator's weapons of choice are a pair of Quanta Pistols. Liquidator will fire alternating between his two pistols. Their high accuracy makes his pistols well suited for taking down Workonics at any range. Also their low energy consumption allows him to keep shooting longer before needing to recharge.

Shooting deals 20 damage and takes 2 energy per shot, shooting continues while the trigger is held down. 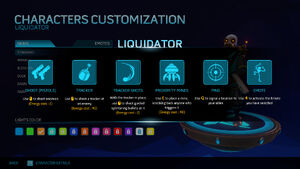 Liquidator uses a tracker shot and placeable mines to defend the extractors.

Places an Ion Mine that will damage and knock back Workonics that trigger it within a radius of 15 meters. Liquidator can only have 5 mines placed at a time, placing a new one will destroy the oldest one if he already has 5 others placed.

The mines deal 25 damage, placing a mine takes 40 energy.

Liquidator is very good at chasing down Workonics. His tracker almost guarantees one Workonic will take 120 damage, enough to take them down at least once. His mines are best on chokepoints on the map like steps and small passages, they'll take down a fleeing Workonic or one to accidentally wander onto a mine at low health.

Because his abilities and weapon are very energy efficient, Liquidator is free to roam the map and chase down Workonics without visiting the extractors too often.

These are the skins currently available for Liquidator, they are available in the Characters menu.