Cyclops is a Workonic character in Aftercharge. With the ability to blind Enforcers they're able to disrupt the Enforcers at critical moments.

This Workonic model was responsible for all the metal cutting required on the construction site. Equipped with the standard invisibility cloak to avoid corporate espionage and the ability to boost any model of Workonic back to life, this Workonic now uses its ability to blind Enforcers it encounters. 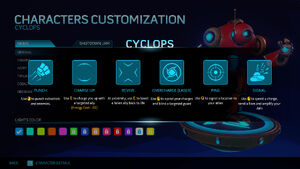 Cyclops' overcharge ability is a Blinding Beam that makes the affected Enforcer unable to see Workonics even when revealed for a limited time. Additionally, the beam will knock the Enforcer back considerably and also remove some of their energy. The duration of the blinding effect and the amount of energy stolen are based on the amount of charges used.

The beam shot by Cyclops is clearly visible and will give away their position to other Enforcers. While under the effects of Blinding Beam the Enforcer's view becomes distorted and gray, also they'll hear a static noise.

Shooting the same Enforcer twice increases the duration by the new amount and will also take the energy.

Each charge used increases the duration by 0.8 seconds beyond the initial second.

Each charge used also increases the amount of energy the Enforcer loses by 5.

These are the skins currently available for Cyclops, they are accessible in the Characters menu.