Builder is an Enforcer character in Aftercharge. He is armed with a shotgun and able to create simple structures from Quanta energy. He can build walls blocking the path of Workonics and also a recharge station that will provide additional energy to Enforcers just like an extractor.

Builder is the handyman of the Aftercharge Corporation Enforcers. He's a skilled engineer who created his custom devices to help the Enforcers contain the Workonics, equipped with his trusty shotgun providing him adequate support up close. Builder is a master at keeping one area closed off with his walls, portable recharge station and trusty shotgun.

Builder's weapon of choice is a shotgun. It fires multiple pellets at once with a high spread, this gives it a massive damage potential up close but makes it inadequate at longer ranges.

Shooting deals 12 damage for each of the 5 pellets and takes 10 energy. 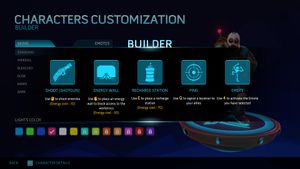 Builder is able to deploy a recharge station and a few walls to help defend the extractors out in the field.

Places an Energy Wall that will block Workonics. Enforcers are completely unhindered by the walls but a Workonic will be unable to pass through them or use any ability through them. Builder can only have 3 walls placed at the same time, placing a fourth will destroy the oldest wall. A Workonic is able to easily destroy a wall with a single punch but it will take about half a second before it goes down and allow them to pass.

Places a Recharge Station that will replenish nearby Enforcers' energy just like an extractor would. Only one station can be employed at the same time, placing a new one will destroy the old one. The stations will provide energy forever but can be destroyed with a single punch. Recharge stations recharge slower than extractors do.

Builder's walls and portable source of energy lend him extremely well to protecting fallen Workonics, preventing them from being revived. Without using Overcharge Abilities it's often extremely hard to rescue a teammate from Builder's little den, especially on your own.

Builder's weapon is reasonably energy efficient considering it's slow firing speed and damage efficiency at short ranges, yet with his recharge station he'll be able to fill up wherever as long as he keeps up 70 energy to place it.

These are the skins currently available for Builder, they are available in the Characters menu.